Freaks And Geeks: What episodes to watch & why

WHAT IS Freaks And Geeks ABOUT?

A witty and clever ensemble comedy/drama series that revolves around a bunch of teenagers living in a fictional suburb of Detroit. Most of the series follows them as they struggle their way through adolescence and high school, generally falling into one of the two categories specified in the show’s title. Although produced in 1999, the series is set in 1980-81 – a time when hand-held calculators and 8-Track Tapes were practically the only high-tech things around.

Viewing Strategy: You can complete the series in less than a week by watching 3 episodes (approx: 2 hours, 12 minutes) per day.

WHERE IS IT NOW?

Netflix, YouTube. A boxed set is also available on DVD and Blu-ray.

WHY IS IT BINGE WORTHY?

Freaks and Geeks is a show that was really too good for its time. And, as shows set in high schools go, this one hits all the marks, tackling issues that really strike a chord with most viewers. Unfortunately, not enough viewers tuned in when the show first aired on TV. It was canceled after one season. 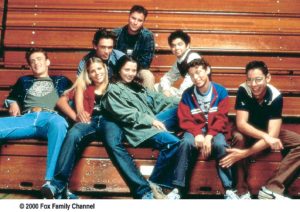 It wasn’t even a full season, in fact. The series premiered in September 1999 and, even though 18 episodes were produced, only 12 of them actually made it to the air during the show’s original run on NBC. After the series was pulled from the air, a viewer campaign convinced NBC to air three more episodes in July 2000. The final three installments ended up airing a couple of months after that, on a cable channel then known as the Fox Family Channel.

As illustrated in the cast list, Freaks and Geeks was also notable for being a significant career launchpad for many of its young stars. The most prominent among the pack: James Franco, Seth Rogen and Jason Segel. But there are plenty of other young (and sometimes barely recognizable) faces who showed up on the series and would also rise to greater prominence afterward.

On the other side of the camera, meanwhile, the show’s creative team was also noteworthy, particularly executive producer Judd Apatow, who has since given TV viewers such series as HBO’s Girls and, most recently, Netflix’s Love.

At the core of the Freaks and Geeks cast is Linda Cardellini as Lindsay Weir, an academic whiz who is desperately trying to shake her “mathlete” image by hanging out with the “cool” and rebellious gang of “freaks” at her school. They include Daniel Desario (James Franco), Ken Miller (Seth Rogen), Nick Andopolis (Jason Segel) and Kim Kelly (Busy Philipps).

Meanwhile, John Francis Daley plays Lindsay’s younger brother, Sam, who is trying to shed his nerdy image as well. But Sam’s circle of close pals is made up of two of the school’s biggest “geeks” – Neal Schweiber (Samm Levine) and Bill Haverchuck (Martin Starr).

An extensive ensemble of characters features a number of older familiar faces, including Joe Flaherty and Becky Ann Baker as Lindsay and Sam’s parents, Dave “Gruber” Allen as the school’s guidance counselor and Thomas F. Wilson as the school’s gym teacher.

There are a lot of 1980s references in Freaks and Geeks, particularly to TV shows (Welcome Back Kotter, Three’s Company, The Muppet Show, Charlie’s Angels, Dallas, M*A*S*H) and other prominent entertainment and celebrity fixtures (disco music, Bill Murray, Garry Shandling, Steve Martin, The Who, Star Wars, Caddyshack, Airplane!) of that era. Music is often a significant “character” throughout the series as well, ranging from the show’s theme song (Bad Reputation by Joan Jett) to a number of other tunes from the 1980s and beyond.

This is a series where EVERY episode is really a must-see – basically because every episode has something worth laughing at. Still, there are some that do stand out …

Pilot (Episode 1): The first episode set the stage for the premise and introduces the handful of young actors who went on to become big stars. Among them: Seth Rogan, Jason Segel, Busy Philipps and James Franco.

Tricks and Treats (Episode 3): The show’s Halloween episode is filled with clever retro bits, including one where Lindsay and Sam’s dad (Joe Flaherty) dons a vampire cape. It’s a comical little salute to Count Floyd, one of the characters that Flaherty played on a sketch-comedy show called SCTV.

I’m With the Band (Episode 6): Lindsay (Linda Cardellini) helps Nick (Jason Segel) grapple with his aspirations for the future. Meanwhile, Sam (John Francis Daley) is freaked out when the school’s gym teacher, Mr. Fredericks (Thomas F. Wilson), tells the boys they all have to take a shower after gym class. This is the first episode of the series that was directed by Judd Apatow.

We’ve Got Spirit (Episode 9): A very young (and totally unrecognizable) Shia LaBeouf guest stars as Herbert, a kid who has been the high-school basketball team’s mascot.

Discos and Dragons (Episode 18): Disco takes center stage in this, the final installment of the series. It was also the highest-rated episode. And no wonder. With the school year coming to a close, the twist in the final final scene brings the entire series to a fitting conclusion.

There aren’t really any shocking episodes in this series. But there are some that have a few revealing or jaw-dropping (yet still hilarious) storylines that do stand out …

The Diary (Episode 10): Lindsay (Linda Cardellini) runs into trouble with her friends, which prompts Lindsay’s parents (Joe Flaherty, Becky Ann Baker) to sneak into her room and read her diary, which leads to some eye-opening revelations – and some big changes around the Weir household.

Looks and Books (Episode 11): Lindsay (Linda Cardellini) gives her friends a ride in her family’s car. Of course, things go wrong – which prompts Lindsay to rethink her entire life.

THAT LINE WAS SO GREAT…

– From Pilot (Episode 1): Delivered by Lindsay Weir (Linda Cardellini), it’s the final line of the pilot episode’s opening sequence, just before the credits and theme song kick into gear. The line sets the stage of what we can expect from her as the show progresses.

“You know, I had a friend that used to smoke. You know what he’s doing now? He’s dead!”

– From Pilot (Episode 1): The first line uttered by Harold Weir (Joe Flaherity) is also the beginning of a wave of several comical exchanges between Harold and his kids, Lindsay (Linda Cardellini) and Sam (John Francis Daley), in which Harold keeps making the point of someone being dead.

– From Pilot (Episode 1): Ken Miller (Seth Rogen) responds when Lindsay Weir (Linda Cardellini) tells him and the guys hanging out with him that her dad is making her go to the school’s Homecoming Dance.

– From Pilot (Episode 1): Neal Schweiber (Samm Levine) responds as Sam (John Francis Daley) wonders about his chances of getting Cindy Sanders (Natasha Melnick) to go to the Homecoming Dance with him.

“I love being told not to drink by a pothead hippie guidance counselor.”

– From Beers and Weirs (Episode 2): Daniel (James Franco) offers Lindsay (Linda Cardellini) his opinion after they duck out of a school assembly that focuses on teenage drinking.

“Friday night, always a good night for some ‘Sabbath.’ ‘Cause, you know, Friday … is the Sabbath … for the Jews …”

– From Beers and Weirs (Episode 2): Neal Schweiber (Samm Levine) tries to display his sense of humor to distract Lindsay Weir (Linda Cardellini) with a joke about the music of Black Sabbath as Sam (John Francis Daley) and Bill (Martin Starr) try to alter things for a party Lindsay is hosting.

“I know, I mean, I’m Jewish. That’s no cakewalk, either. I was elected School Treasurer last year. I didn’t even run.”

– From Beers and Weirs (Episode 2): Neal Schweiber (Samm Levine) offers his point of view after an African-American student he encounters at the party says Neal wouldn’t want to trade places with him.

– From Tests and Breasts (Episode 5): (Samm Levine) tosses out a quip as the boys’ gym teacher, Ben Fredericks (Thomas F. Wilson), highlights an illustration of the female reproductive system during a sex-ed class.

“Love is like homework. You gotta study if you wanna get an ‘A’”

“You are a dumb-ass, Andopolis. Rock ‘n’ roll don’t come from your brain. It comes from your crotch.”

– From I’m With the Band (Episode 6): Daniel (James Franco) rebels when Nick Andopolis (Jason Segel) makes their band rehearse too much.

“Freaks only date Freak Girls. And you’re not a Freak Girl.”

“This? The thumb? You think I don’t know what that means? I know, Lindsay. It means, ‘Hey, Stranger, please lock me in your car, drive me to God knows where and murder me!’”

“Alright. Fine. Go. Just keep those boys away from your accordion.”

– From Dead Dogs and Gym Teachers (Episode 14): Harold Weir (Joe Flaherty) reluctantly consents to letting his daughter, Lindsay (Linda Cardellini), go to a concert by The Who, even though he thinks the lyrics to the group’s song, Squeeze Box, are pornographic.

A lot of the goofy and great moments in Freaks and Geeks actually spill out of the entire dialogue exchanged between characters. Some examples:

“Well, then every guy in America is a pervert.”

“So, is this what having a girlfriend is gonna be like? She’s your best friend and she’s beautiful and you can say and do anything in front of her?”

“Well, my dad always says that’s what women want you to think before you marry them. That’s how they suck you in.”

“She’s the kind of woman you can cut the cheese in front of.”

“Oh yeah, Bill. That’s what love is all about.”

“That is true. I mean, you have to sleep with your wife every night of your life. If you couldn’t blast one in bed, you’d get physically ill.”

“What do you think you do? Get up and run outside every time you have to let one rip? You’d never get any sleep.”

“So what? The Muppets are cool.”

“The Swedish chef is kinda cool, but … Miss Piggy is lame.”

“Cindy is not abnormal.”

“Yeah? She cut the cheese.”

“I heard it, man. I swear. She blamed it on the chair. She cut the cheese.”

“Well, some chairs make weird noises. What kind of a chair was it?”

“It wasn’t a squeak. It was the sound of cheese being cut.”

– From Girlfriends and Boyfriends (Episode 8): Sam (John Francis Daley) and Bill (Martin Starr) exchange jabs after Cindy (Natasha Melnick) is assigned to become Bill’s biology-lab partner and they go to Cindy’s house to work on a project.

“How could you tell?”

“I’m not dumb, Lindsay. I know what high people look like. I went to a Seals and Crofts concert last summer.”

– From Chokin’ and Tokin’ (Episode 13): Lindsay Weir (Linda Cardellini) appeals to Mille Kentner (Sarah Hagan) for help with a babysitting gig when Lindsay gets high after smoking pot for the first time.
Ken: “What? Are the Blues Brothers doing a show in town tonight?”

“No. George Bush is coming to speak to the school.”

“The Vice President of the United States of America, George Bush.”

Previous The Wonder Years: What episodes to watch & why
Next George Clooney and a Great Cast Bring Joseph Heller’s Classic ‘Catch-22’ to Life