Hulu has already proved itself highly effective in series adaptations of literary classics, thanks to its acclaimed The Handmaid’s Tale, which premieres Season 3 next month. This month, the streaming service tackles another great novel with timely implications in a six-part miniseries adaptation of Joseph Heller’s satire of war and bureaucracy, Catch-22. All six episodes are available to stream beginning May 17.

George Clooney is an executive producer on the series, directed two episodes and has a minor role as manic military leader Scheisskopf. Among the other cast are Christopher Abbott as John Yossarian, Kyle Chandler as Col. Cathcart, executive producer Grant Heslov as Doc Daneeka, Hugh Laurie as Major de Coverley, Giancarlo Giannini as Marcello, Daniel David Stewart as Milo Minderbinder and Lewis Pullman as the memorably named Major Major.

Even if you’ve never read the 1961 classic or seen its 1970 film adaptation, you likely know the enduring legacy that Heller left in the form of his story’s titular “catch.” Almost immediately after the book’s publication, the term “Catch-22” entered our lexicon to refer to a paradox in which the attempt to escape a situation makes escape impossible.

Throughout Heller’s tale, the sinister, unwritten bureaucracy of Catch-22 manifests itself in a variety of ways. For Yossarian, part of an Allied bombing crew stationed on an Italian island during World War II, he fully experiences its perverse logic when it comes to attempts at self-preservation.

According to Catch-22, concern for one’s own safety in the face of threats that are real and immediate is the process of a rational mind. A man is considered insane if he willingly continues to fly dangerous combat missions. He can request to be removed from duty, but such a request is evidence of sanity, and therefore makes him ineligible to be removed from duty.

“That’s some catch, that Catch-22,” Yossarian marvels in a famous exchange from the book, which is also featured in the miniseries. “It’s the best there is,” agrees Doc Daneeka. 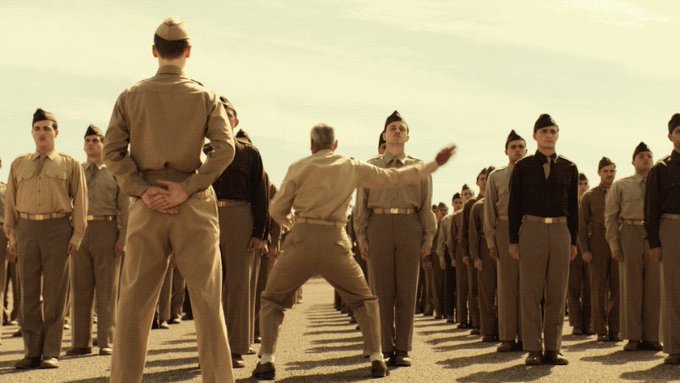 As mindbending as understanding the convoluted Catch-22 can be, Heller’s novel and its film adaptation present their own complicated storytelling challenges for readers and viewers. Each uses a nonlinear approach, jumping into the perspectives of different characters at different periods of time. For this version, cowriters/executive producers Luke Davies and David Michôd knew they needed a different approach, and they’ve succeeded in simplifying the presentation while effectively maintaining the horror and humor of Heller’s work.

“What we basically did was unfold the chronology so that all our characters could have actual emotional journeys from beginning to end,” Davies explained. “We really hope that we’ve retained the kaleidoscopic madness of the novel. … [But] the show really flows through [Yossarian’s] perspective.”

“It’s a lot more linear than the book, for sure,” Clooney agreed. “I think David and Luke did an amazing job with unspooling these characters because, when you do a movie, you don’t have enough time to really get to know the characters, and that’s why you do this as a television show. You get to spend time with the characters like the book does. And they just figured out a way to interpret it in a way that we didn’t think was really possible.”

Previous Freaks And Geeks: What episodes to watch & why
Next Return to Mystic Falls With ‘Legacies’ on The CW