Why I Should Watch The Shield

WHAT IS The Shield ABOUT?

A gritty police drama set in Los Angeles, The Shield revolves around a group of detectives dedicated to battling gang activity in the fictional Farmington neighborhood of L.A. Michael Chiklis tops the cast of the series as an ethically compromised detective named Vic Mackey, who heads up the unit known as the Strike Team, which often relies on unethical, corrupt – and illegal – methods to nab bad guys.

Viewing Strategy: You can easily complete the series in roughly 3 weeks by watching 4 episodes per day. 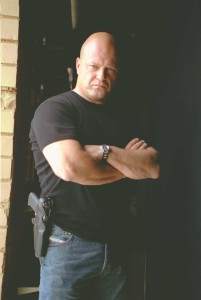 Begin where is it now section

WHERE IS IT NOW?

Amazon, Hulu, CraveTV, Crackle. Also available on DVD, either as individual seasons or in a boxed set containing the complete series.

WHY IS IT BINGE WORTHY? 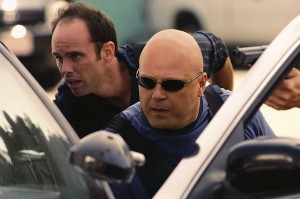 The Shield was a creative masterpiece that came from executive producer Shawn Ryan, who has since given TV audiences such other series as The Unit and Lie to Me. This one was Ryan’s first big milestone series. It was also the first big breakout hit for FX. In fact, it was the first show that really turned FX into a go-to cable network.

The series is notable for a lot of unique stylistic features, quick zoom-ins and zoom-outs and a lot of other in-your-face camera work. The cold-opening sequence of each episode cuts back and forth between the show’s credits and the initial scenes that set the stage for each installment. That cold opening often pulls you in so deeply that you’re surprised when the show’s theme song and title card hit the screen.

Speaking of the theme song, it’s a vivid one: Just Another Day, performed by Ernesto J. Bautista, Rodney Alejandro and Vivian Ann Romero. It’s part of an extensive collection of hard-rocking tunes that are often interspersed throughout the series.

The Shield snagged a handful of notable awards, particularly for its first season, nabbing the Golden Globe Award for Best Television Series (Drama). Chiklis, meanwhile, won both a Golden Globe and an Emmy Award for that same season as best lead actor in a drama, as well as the coveted Television Critics Association Award for individual achievement in drama.

Chiklis is joined by a rock-solid cast throughout the series, including Walton Goggins, Kenny Johnson and David Rees Snell in the roles of Shane Vendrell, Curtis “Lem” Lemansky and Ronnie Gardocki, the veteran detectives who help make up the Strike Team. Benito Martinez delivers a strong stint as David Aceveda, Vic Mackey’s adversarial police captain, who later claws his way up the slippery pole of municipal politics. 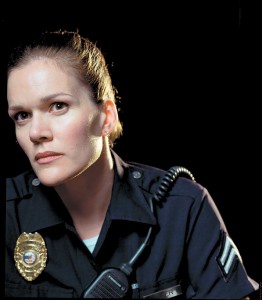 Rounding out the core cast are Jay Karnes and CCH Pounder as Holland “Dutch” Wagenbach and Claudette Wyms, two detectives who act as a moral compass in many of the show’s storylines, and Catherine Dent and Michael Jace as Danielle Sofer and Julien Lowe, two street officers who each grapple with assorted personal issues. Also noteworthy in the core cast: Cathy Cahlin Ryan (Shawn Ryan’s real-life wife), who plays Vic Mackey’s wife, Corrine, a role that gets bigger and more significant as the show moves toward the end of its run.

Pilot (Season 1, Episode 1): The first episode rapidly unveils the premise of the series and the personality clashes that are part of it, particularly the one that lingers between Strike Team leader Vic Mackey (Michael Chiklis) and his commander, Captain David Aceveda (Benito Martinez). You also soon get a sniff of the fact that Mackey is one tough cop with not-so-honorable ways of getting his job done.

Our Gang (Season 1, Episode 2): Vic Mackey (Michael Chiklis) struggles to cope with what happened in the final moments of the first episode. The struggle is highlighted by flashback sequences that shed some more light on the backstory.

Circles (Season 1, Episode 13): The first-season finale caps off a gripping number of plotlines that built up momentum as the season progressed. The excellent episode also sealed the deal for many of the awards won by the series for its dynamic first season.

Co-Pilot (Season 2, Episode 9): This is a great, fun-filled flashback episode that puts together a lot of pieces of the show’s puzzle that weren’t included in the pilot episode. The story jumps back 14 months to detail how the Strike Team was formed and how everything got rolling in the precinct that quickly came to be known as “The Barn.” It also details the origins of the relationships between Vic Mackey (Michael Chiklis) and the various other characters in the show.

Dominoes Falling (Season 2, Episode 13): The second-season finale offers up a big turn of events as the Strike Team carries out a plan that will have repercussions that linger throughout the next season. 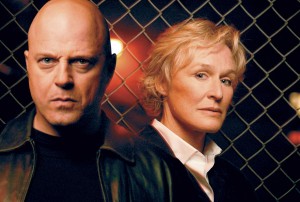 The Cure (Season 4, Episode 1): Glenn Close joins the cast as Monica Rawling, the new police captain who replaces David Aceveda (Benito Martinez) after he gets elected to the city council. The episode also has David Marciano joining the cast as Detective Steve Billings. Perhaps most notable among the cast additions: Anthony Anderson, best known these days as Andre “Dre” Johnson on ABC’s Black-ish, a role that is a far cry from the recurring stint he had in this series. This episode kicks off Anderson’s stint as Antwon Mitchell, the leader of a gang called the One-Niners. And he is one bad-ass dude.

Extraction (Season 5, Episode 1): Forest Whitaker joins the cast as Jon Kavanaugh, a police internal-affairs investigator who begins a probe of the Strike Team.

Pilot (Season 1, Episode 1): The first episode of the series is probably also one of the most shocking installment of the entire series, mainly because of the unexpected things that happen at the end of the episode. Set to the hard-rocking, rough-and-tumble strains of Kid Rock’s Bawitdaba, the closing sequence is an intense barrage of scenes revolving around the main storyline that focuses on the Strike Team’s raid on a drug dealer’s home. There’s a stunning twist at the end that really does come out of nowhere.

Blowback (Season 1, Episode 4): Sometimes, the shockers on The Shield are accompanied by dark humor and simple laughs that offset the intense dramatic moments. A drug bust by Vic Mackey (Michael Chiklis) and his crew takes a corrupt turn when they decide to keep some of the goodies. But there’s a twist that befalls them along the way. There’s also an episode-ending moment that is both surprising and hilarious.

Two Days of Blood (Season 1, Episode 12): Up until this point, Assistant Police Chief Ben Gilroy (John Diehl) has been a secret friend and ally to Vic Mackey (Michael Chiklis). But all that is about to change as Gilroy reveals a dark side of himself that blindsides Vic.

Mum (Season 3, Episode 5): Captain David Aceveda (Benito Martinez) finds himself in a traumatic predicament when he ends up being held at gunpoint by two gang members.

Postpartum (Season 5, Episode 11): The fifth-season finale comes to a boil as Vic Mackey (Michael Chiklis) and the rest of the Strike Team work on arrangements for Curtis “Lem” Lemansky (Kenneth Johnson) to flee to Mexico. Lem ends up making quite a notable exit from the show.

Parricide (Season 7, Episode 8): Vic Mackey (Michael Chiklis) and Ronnie Gardocki (David Rees Snell) become the targets of a deadly plan cooked up by Shane Vendrell (Walton Goggins). When the plan falls apart, you just know revenge is on the horizon.

Family Meeting, Part 1 (Season 7, Episode 13) and Family Meeting, Part 2 (Season 7, Episode 14): Some streaming sites split this one into two episodes while others leave it as one. In any case, the series finale goes out with a real bang as Shane Vendrell (Walton Goggins) goes to extreme measures to “protect” his pregnant wife and young son. The episode is filled with some headspinning moments right to the end.

THAT LINE WAS SO GREAT…

Virtually every episode of the series is brimming with great, sarcastic lines. Some of the most notable ones in the pack:

“Well, maybe in your own mind, amigo. But in the real world, I don’t answer to you, not today, not tomorrow, not even on Cinco de Mayo.”

– From Pilot (Season 1, Episode 1): Vic Mackey (Michael Chiklis) mouths off to Captain David Aceveda (Benito Martinez) in front of everyone at the police station after Aceveda insists that Mackey file his report right away because, as Aceveda sternly points out, “in this building, I’m in charge.”

“Mackey’s not a cop. He’s Al Capone with a badge.”

“Nah. Good cop and bad cop have left for the day. I’m a different kind of cop.”

– From Pilot (Season 1, Episode 1): Vic Mackey (Michael Chiklis) offers a brief explanation when a suspected pedophile (Jim Ortlieb) mockingly asks whether it is Mackey’s turn to “play bad cop.” Mackey then proceeds to beat the truth out of him.

“Come on, Captain, you know how these rich pricks are. He probably has his face snorkel deep in some broad’s snatch. Give him a few hours. He’ll come up for air.”

“Unless the first question on the test is ‘Will you sleep with me?’ you are wasting your time.”

“Believe it or not, you and me want the same things – taxpayers safe, bad guys behind bars.”

“I guess I must have missed something. Last person I saw you kissin’ was a little more … male. You sure you know what you’re doing?”

– From Barnstormers (Season 2, Episode 7): Vic Mackey (Michael Chiklis) takes a jab at Julien Lowe (Michael Jace), who has been struggling with his sexual orientation, after Vic sees Julien kissing the woman he is planning to marry.

“When was the last time you saw your dick without using a mirror?”

“You’re an expert on making guys long and hard?”

– From Co-Pilot (Season 2, Episode 9): Shane Vendrell (Walton Goggins) takes a verbal jab at Curtis “Lem” Lemansky (Kenneth Johnson) after Lemansky talks about the Strike Team collaring a suspect by hitting him “long enough and hard enough” to make a case against him stick.

“See anything I should take home?”

– From Bottom Bitch (Season 3, Episode 4): Detective Trish George (Nicki Micheux) asks Vic Mackey (Michael Chiklis) for his advice after he checks out the bag of sex toys that belong to a politician whom Trish arrested for solicitation.

“I went after a suspect today. And I kicked the shit out of him. The only thing that stopped me was … I started to piss my pants. I’m losing control of everything.”

– From Safe (Season 3, Episode 5): In the final scene of the episode, David Aceveda (Benito Martinez) confesses his emotional turmoil to a relative as Aceveda struggles to cope with having been the victim of a sexual assault.

“Having a thankless job is bad enough. Getting shot for it is just insulting.”

– From All In (Season 3, Episode 14): Holland “Dutch” Wagenbach (Jay Karnes) comments on the suspected revenge shooting of a public defender.

“And that, Ladies and Gentlemen, is my final encore. Making the great Vic Mackey think I’m everyone and everywhere – responsible for all the worst crimes against humanity. It’s sad, really. You know, chasing ghosts haven’t done you any favors. I didn’t ‘off’ your boy. Wished I did, and so do you. ‘Cause if you’re coming after me for this, that means you lost your last clue. Good seeing you, though.”

– From Chasing Ghosts (Season 6, Episode 6): Antwon Mitchell (Anthony Anderson) shrugs off implications made by Vic Mackey (Michael Chiklis) during a prison visit after Vic accuses Antwon of arranging to have one of Vic’s associates killed.

Previous Let’s Just Get This Over With: How to Survive Super Bowl LIII
Next New to On Demand and DVD: Bohemian Rhapsody